Mindfulness. It’s about being in the moment. Nothing but what you feel right now should matter. Nothing but the sensation of putting your foot to the ground, feeling the gravel underneath your soles, the wind against your face and how the clothes on your body feel against the skin. Being in the now. Something to long for.
I do love the feeling of being in the now – when I manage to achieve it.

But you can also be too much in the now. Like my parents-in-law. They both suffer from Alzheimer’s disease and can’t be anywhere but in the moment. To them, everything is unknown. They don’t remember having seen you before – you’re a new acquaintance. Always fascinating and welcomed (well, not always), but new.

It makes me think about the importance of memory. Who are we if we can’t live in the past as well as in the now and – like most people I know who are longing to get somewhere – in the future?

I have been brooding over this for the past few days. I am setting off to my old home town Berlin come Saturday. Last time I was there, was in 2015, and it was because of work. We were shooting a language series called “Los, frag!”, that I developed and cast to make the German language fun to learn. It also happens to be the ser 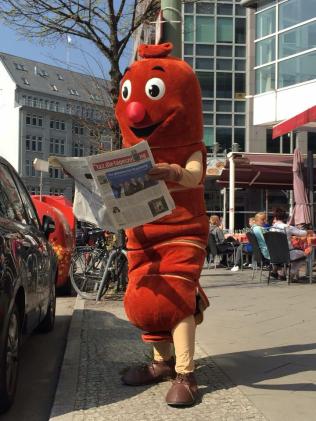 ies where I, myself, turn up in the shape of a currywurst – a very sweaty experience 😊.

But before that, I lived in Berlin for several years, after having studied at the FU Berlin and come to love the very particular atmosphere that sets Berlin apart from other world capitals.

Somehow, it was like everybody could be who they wanted to be and do what they wanted to do. It felt like the city was limitless – as were the options offered to everyone who was ready to grasp them.

To me, Berlin was the city of dreams – here, everything could happen. People didn’t worry so much about money, status or fame. They wanted to realise their dreams and be who they were supposed to be. And so did I. In Berlin, I have felt such strong surges of happiness.

Some of it might have had to do with me being quite young still – not closing doors on myself, which becomes more common as you grow older.
But mostly I think my happiness was due to me learning something new every day, being challenged both language-wise, culture-wise and knowledge-wise.

To me that is a kind of mindfulness – when you are learning something, you have to be present. You have to focus on what is happening right then and there.
Of course, I knew how to get around, speak the language good enough, and how to do things – I just didn’t know how to do it like the Germans.

And that might be key to understanding the situation of every newcomer in a country. You have lots to offer, but you don’t offer it the way people are used to. You offer it like you, with your own backlog of experiences, cultural expressions and reference points. And you are totally new to them.

Thus, being able to actually get a job, find friends and make a life in another country, requires something from you.
I had been living in other countries before Germany and knew that one major success factor was to not hang out with other Swedes. You need to take the more difficult route, the one with friction and obstacles, and start interacting with the Germans – in German. And you need to be patient – because not everybody is patient with you. I can’t count how many possible friendships never happened because of me trying to speak German and being too slow finding the words. People fled before I finished my sentence.

But there were also the others. Those who were curious. Who stayed on. Offered me a phone number and said, “let’s have coffee some day.” And that’s where I had to be courageous. To actually call that person who had given me her number – even though I felt stupid and thought she might not have meant anything by it.
Making the call, I gave her the benefit of a doubt – not painting her with my own cultural brush. If you have the courage to let other peoples’ canvases be white until they paint them themselves, the picture will be all the more sparkly and colourful for it.

Slowly I built a social context for myself in this new city – I landed some jobs and spent some great years in Berlin – before saying yes to another opportunity, moving back to Sweden.

The fact that my soon-to-be work trip to Berlin brings about all these memories, makes me both happy and sad. Happy, because I have this in my past. Not only because it gives me wonderful friends to meet up with when I travel to Berlin, but because the past affects the now and the future.

Without our past, who are we?

And, so we go on, striving to live in the now – striving towards mindfulness.  But, I for my part, will do it moderately, with the express wish of revisiting my past and planning my future with all that I have collected over the years.

All that, which has made me who I am today – but perhaps not the one I will be tomorrow. It’s like the city of Berlin – it rests upon a past not to be ignored, but it is also in constant change. Every time I go there, something is different – and that makes it both exciting to revisit and holds up a mirror to myself.

For, what have I, if not changed, since the last time we saw each other…